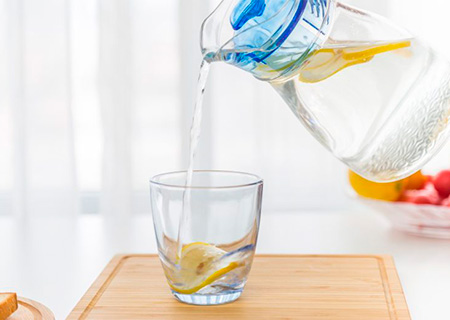 Bottled water or tap water? Which should we be drinking?

In the developed world millions of bottles of water are consumed every day, 80 million bottles in the United States alone. Bottled mineral water is promoted as being cleaner than tap water and better for our health. Is this true? Is there such a thing as ‘pure’ water? An examination of this question reveals that the availability and quality of water is a global issue and one with which we should all be concerned. Water is becoming a scarce resource. The corporations who sell bottled water are defining the control of water. And the environmental and health arguments for not drinking bottled water are compelling. But is tap water safe?

Around 18 billion bottles of water are bought each year in Britain alone. It is only in the past 25 years that we have started drinking water from bottles. The trend for drinking mineral water started in the 1970s with the introduction of Perrier. However, it was after lightweight PET bottles were introduced in 1989 and clever marketing campaigns by companies such as Evian that the bottled water market really took off. Advertising for mineral water played on the burgeoning health and fitness trend and associated water with health and vitality using sports people, celebrities and models as examples. Bottled water was a US$ 11.5 billion business in 2007 according to the documentary ‘Tapped’.

But is bottled water really better for us? According to a Telegraph article published in 2013, 30% of water sold in UK supermarkets is tap water. Mineral water comes directly from pure mountain sources and is not treated but does not have the stringent quality controls that are required from tap water suppliers. Recent articles in French newspaper Le Point, based on research from a consumer association, reported that one in five bottles of mineral water contains traces of pesticides and drugs including Tamoxifen, a drug used in the treatment of breast cancer. Added to this, independent tests carried out by laboratories in America, looked at the toxins that can leach from plastic bottles. Chemicals in the water included benzene, styrene and phthalates which are know to disrupt the body’s hormone system and are cancer causing. The scientist Dr Stephen King from Toxicology Inc states that bisphenol-a (BPA) found in 5 litre bottles of water is one of the most potent toxic chemicals known to man and could be responsible for a host of illnesses including diabetes, various cancers, brain disorders and liver disease.

Another issue of global concern caused by the growth in the popularity of bottled water is that the world water supply will end up in the hands of private companies. Only 2% of the world’s water is potable and it is running out. By the year 2030, two-thirds of the world’s population will not have access to clean water. This is such a global issue that experts believe that wars will be fought over water. We need water to live and it is a fundamental human right but companies such as Nestlé, Coke and Pepsi are buying or taking over water supplies.

The environmental impact of plastic bottles is another strong argument for not drinking water from them. In America, only about 20% of bottles are recycled. Many end up in land-fills or in the dumping areas of the world’s oceans. Ecologists have analysed the water in these areas and found it to be a plastic soup affecting marine life and the food chain. Also, the amount of petrol used in the production and transport of a bottle of water is the equivalent of the quarter of a bottle of petrol.

What about the quality of tap water? Before answering this question it is useful to look at the definitions of pure water and mineral waters. In chemical terms, pure water is literally, H2O, two molecules of hydrogen and one of water. However, water does not exist this way in nature. This is due to the polarity of water molecules that make it a solvent. As water goes through its various cycles it dissolves various gas and solid molecules and ends up as a mixture of various substances. Some of these are essential minerals such as magnesium, potassium and iron other are heavy metals such as lead and mercury or cadmium or toxins including oestrogen compounds from drugs and plastic (bottles!) and nitrates that leach into the water from industry, agriculture and land-fill sites.

So what about the quality of tap water? It depends on where you live in the world or even on the area in which you live. The further downstream you live from a source, the more chance that pesticides and drugs have found their way into the water. Waste-water is recuperated and treated from towns upstream and if you live a long way from the original water source the water can have been recycled and treated several times. It is treated to ensure that is free from bacteria and certain toxins and is monitored regularly following stringent quality controls that have been put in place as the health effects of various chemicals become known. Reports on the quality of water are available from water suppliers.

However, many natural health practitioners feel that the levels of toxins that are considered ‘safe’ are too high. Dr Andrew Weil, in his book 8 Weeks to Optimum Health, says “Stop drinking chlorinated water”. According to the US Council of Environmental Quality: “Cancer risk among people drinking chlorinated water is 93% higher than among those whose water does not contain chlorine.” Chlorine is used in the water purification process. And, we have already seen, other toxic products are found at various levels in tap water and mineral water.

To eliminate further potentially toxic materials in water it would be advisable to use a water filter. Various methods of filtration are available ranging from carbon filters found in water filter jugs to reverse osmosis filtration systems that can be installed on a home water system. There are various pros and cons to each type. According to experts, reverse osmosis and carbon filtration remove everything but pathogens (which would normally have been eliminated after chlorine treatment). Reverse osmosis has a down side in that all the good trace minerals are removed as well. However, a healthy balanced diet should replace essential minerals.

In conclusion, vast improvements have been made to improve the quality of tap water but concerns still remain for those who are concerned with optimum nutrition. Using a filter jug is probably you best option. And one thing seems certain; the worldwide benefit to the environment of not using bottled water outweighs any potential individual health benefits.

Royal Society of Chemistry, (2008) ‘Something in the Water’ [On line] Available http://www.rsc.org/chemistryworld/Issues/2008/September/SomethingInTheWater.asp (13 December 2013)

Be SMARTER about your health goals

How to manage your response to stress

Can you be healthy in the middle?

What to eat in October